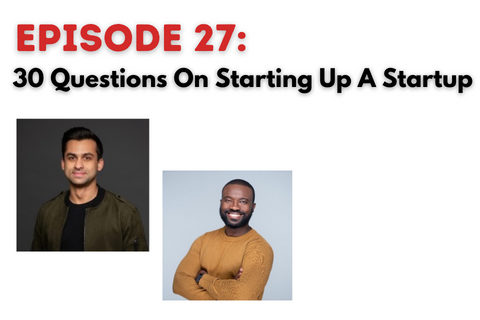 Going Forth Episode 27: 30 Questions On Starting Up A Startup

Albert Owusu-Asare ’16 and Ameer Shujjah ’16 met on their second day at Grinnell and quickly realized they had a lot in common: they both played sports and tutored in their free time, they both planned to double-major in physics and computer science, and they were both international students stepping foot in Iowa for the very first time. What they didn’t realize at the time was that this friendship would be the lantern illuminating the path they have been on ever since.

When a phone call with Albert’s sister revealed the problematic intricacies of the monthly-payment cycle in developing economies, Albert knew he needed to do something to help. He called Ameer, his Grinnell partner in crime, and together they created Cadana: a mobile payroll app that allows African workers to access their earned wages on-demand. Since its launch in 2019, the startup has grown steadily, seen tremendous success, and touched the lives of workers all over the continent of Africa.

This year, Albert and Ameer were named on Forbes Magazine’s famous “30 Under 30” list of the nation’s brightest, most influential young entrepreneurs. In honor of this achievement, Nicholas and Meredith ask the pair of ex-roommates thirty questions on how they did it, from securing early funding to collecting feedback to coping with feelings of doubt. This is your guide to starting up a startup.